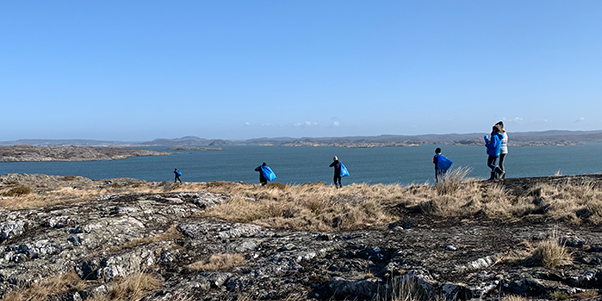 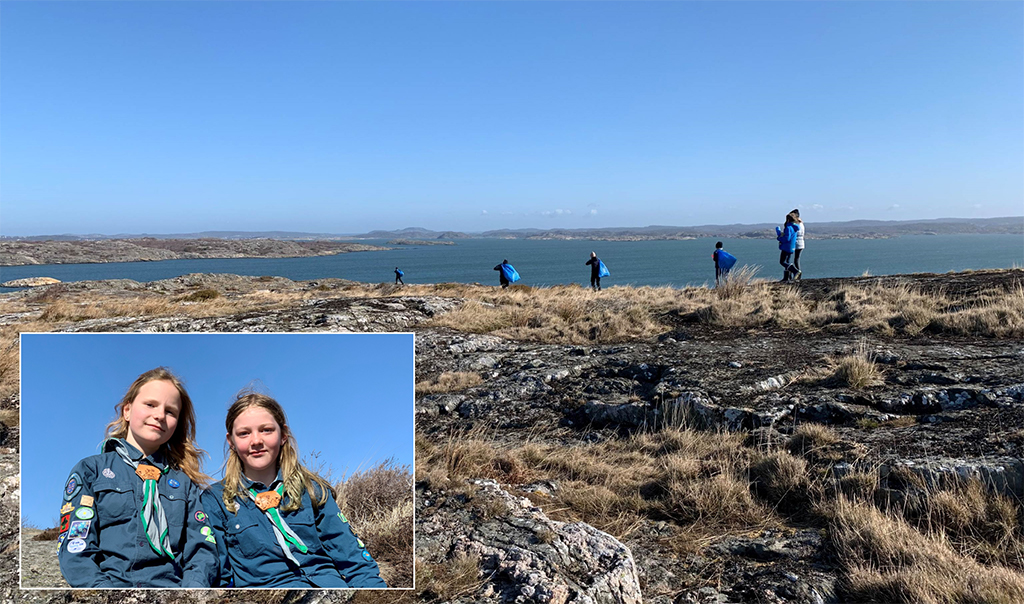 Kode Scout Troop hails from the municipality of Kungälv; it’s been scouting since 1979 and has approximately 110 members aged 8 and above. The Scouts follow the recommendations of the Public Health Agency of Sweden and feel that meaningful outdoor activities for children and youths are important, even during the current pandemic.

More than 40 dedicated scouts from the Kode Scout Troop were the first to use the West Coast Foundation’s new beach cleaner app in early April, when they collected 16 large sacks of trash in one day. The app is a new addition to the Beach Cleaner Map as operated by the West Coast Foundation since 2015. It helps anyone moving along the coast to tag where they’ve picked up trash, where their trash bags are located and what still needs to be cleaned, or to invite people to a cleaning activity. Everyone can lend a hand for cleaner coasts!

Eleven-year-olds Ada and Emma are two adventure scouts from the Kode Scout Troop who took part in a beach cleaner hike to help clean beaches, rocky outcrops and coves on four small islands off of Marstrand:

“We took a boat with our Scout Troop to pick up trash along an island’s beaches. Walking right around the island was fun, but also a bit difficult across all the rocks. Picking up trash is good for the environment and being with friends is fun. We learn a lot about nature and get to be outdoors and spend time together.”

They’re eager to tell everyone about how much trash there is and how they can lend a hand – all you need is a trash bag!

Marine debris has become a huge problem both at sea and along our coasts, and the Bohus coast is inundated with hundreds of tons of trash every year. The Clean Coast Project began in 2012 as a collaboration between Bohuslän’s ten coastal municipalities – Strömstad, Tanum, Sotenäs, Lysekil, Uddevalla, Orust, Tjörn, Stenungsund, Kungälv, Öckerö and Gothenburg. Kungsbacka has also been included since 2018. In 2015, the project became part of the West Coast Foundation, and since 2018 its work has been financed by grants from the Swedish Environmental Protection Agency.

“One of the most important tasks was to develop a common digital tool in an interactive map that is used to plan, communicate and report cleaning efforts,” explains Florina Lachmann at the West Coast Foundation. “It’s known as the Beach Cleaner Map and has been available in an online version since 2015. It helps municipal cleaning teams, contractors and volunteers out along the coastline submit reports.”

A Beach Cleaner Map app has now been developed in collaboration with Infracontrol.

“The app makes it easier for all cleaners to tag which beaches have been cleaned or where trashbags are located ready for pickup,” says Jonas Bratt at Infracontrol. “It makes it easier to post activities and encourage others to participate. More importantly, it also makes it easier for anyone who sees a beach or bay that needs cleaning to tag it.”

The app is available for download free of charge from Google Play and AppStore. Just search for Beach Cleaner Map. 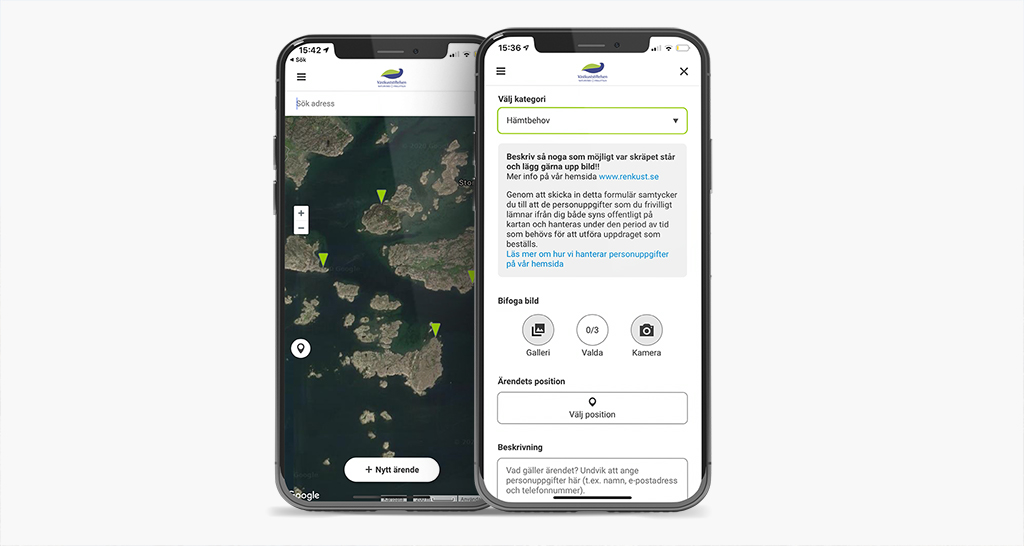 The West Coast Foundation has also made things simpler ‘indoors’, and they now use Infracontrol Online to receive and process all reported cases.

“We get information from the Beach Cleaner Map and pass it on to those responsible for garbage collection, which usually means municipalities or their garbage collection contractors,” says Florina Lachmann. “Until recently, it involved a lot of manual processing, but now we’ve simplified and accelerated the flow of cases considerably.”

When the Beach Map became available as an app, we also launched another improvement for all beach cleaners. Jonas Bratt explains:

“The West Coast Foundation, in collaboration with Ericsson, has developed a wireless keypad that lets beach cleaners, by tapping a key, notify if the trash station is full or whether it needs to be topped off with new trash bags. The signal is received by Infracontrol Online, which forwards the information to the relevant personnel.”

So far, three keypads have been deployed, one in Metvik just outside Lysekil, one on the west side of Stora Kornö and one in the center of Gåsö.