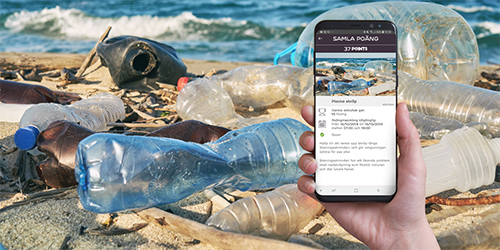 For just over a year, the Cascais municipality in Portugal has been using the City Points app to engage its residents. Whenever they do something to benefit the community, they are awarded points via the app. The points can be used to compete against others or trade for vouchers. For municipalities wishing to take their residents‘ involvement to the next level, Infracontrol is now offering a chance to test the app.

David Gustafsson, business developer at Infracontrol in charge of the service, tells us more:

Because this is a relatively new service, he tells us that Infracontrol has now made it easy for municipalities to get started by trying out City Points.

– We‘re currently offering a test period free of charge to the first three municipalities that want to try the service. By starting on a small scale for a limited period in a limited area, municipalities can get to know its capabilities and gain a good start for continued implementation.

To succeed in building a safe, inclusive and sustainable society we need to motivate our residents and get them willingly involved in exerting a positive influence on developments.

– City points gives residents the opportunity to collect points when they carry out different socially beneficial activities, says David Gustafsson. This could mean giving blood, handing in waste for recycling, participating in voluntary work of various kinds or providing observations and fault reports via Infracontrol Online. Other activities might include discovering different local destinations, hiking a trail or taking part in other outdoor activities.

He tells us this provides a municipality with the ability to inform its residents about beneficial activities and encourage them to adopt more sustainable behavior.

Individuals collect points by verifying their participation in different activities using a QR code and a GPS position, or by a person verifying this at a venue. Points collected can be used to compete with others, individually or by group. They can also be traded for a voucher with which to purchase public transport tickets, cycle hire, start fees for marathon races, concert tickets, eco-products and similar.

– It‘s entirely up to the municipality to choose if they want to use the points in this way, and if so what for, says David.

He goes on to tell us that residents can donate their points to others or for charitable purposes, and in doing so earn even more points.

Try it for free!

Because City Points has attracted so much attention from so many Swedish municipalities, Infracontrol is offering the chance of a trial period, free of charge, to municipalities who want to show how serious they are about getting residents involved.

– It‘s mainly about informing residents about good activities, says David Gustafsson. Being rewarded with points should mainly be seen as a pat on the back – that the municipality is showing its appreciation by acknowledging its residents.

He says that a test should be limited in scope so as not to make it too complicated in the beginning. It‘s easy to scale up later.