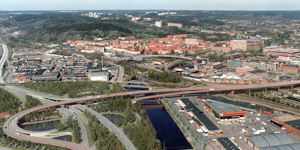 On December 1, the new Partihall link will open in Gothenburg. A fixed bridge link such as this does not look as though it contains a great deal of technical equipment that will require control and monitoring, but it has an advanced installation for taking care of surface water before it’s released. In the event of a hazmat spill on the bridge or adjacent road network, water in the surrounding environment is protected by means of automated detectors and contingency plans at the traffic management center.

“It was an extremely interesting project. Few people realize that even this type of installation includes advanced technological equipment that must be controlled and monitored. It was a great feeling to help make sure the environment stays well protected.”

The Partihall link is a new 1.1 km, four-lane bridge that connects the E20 highway with the E45 just east of Gothenburg’s Tingstad tunnel. The new link will relieve the strain on existing highways, thereby reducing the vulnerability of the rest of the road network. The relief will mean reduced congestion and a better ability to divert traffic in the event of disruptions. The link is anticipated to improve the environment with less noise and better air quality in the surrounding neighborhoods. The project was begun in 2008 and will be inaugurated on December 1, following three years’ intensive work.

Infracontrol has been engaged to supply the control and monitoring system to Elektro Emanuel in Veddige, which is supplying all electrical installations to Skanska, the project’s main contractor. The total project cost is approximately SEK 1.7 billion.

Protecting the environment from pollutants

Transport infrastructure such as the Partihall link generates a great deal of surface water that must be safely taken care of. For this reason there is an advanced installation that collects water and pumps it to sedimentation basins and a holding reservoir where it is cleaned by allowing particles to slowly sink to the bottom before the water is released into the Säve River.

The installation is controlled and monitored with the aid of PLCs and SCADA systems supplied by Infracontrol. The system’s most important task is to make sure only clean water is released into the River Säve and that substances hazardous to the environment do not leave the installation if a hazmat discharge happens on the bridge.

“Managers at the traffic management center have contingency plans that help them quickly shut down the plant in the event of an accident,” Johan tells us. “There are also a number of sensors that detect hazardous substances and automatically switch off pumps and close sluice gates.  It’s enormously important that pollutants such as gasoline or oil are not released into the Säve River but are taken care of in a controlled manner.”