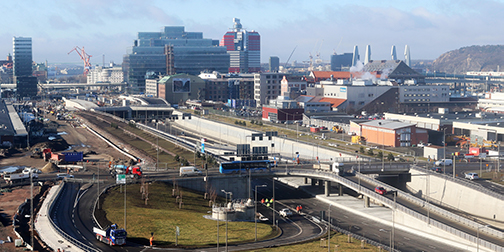 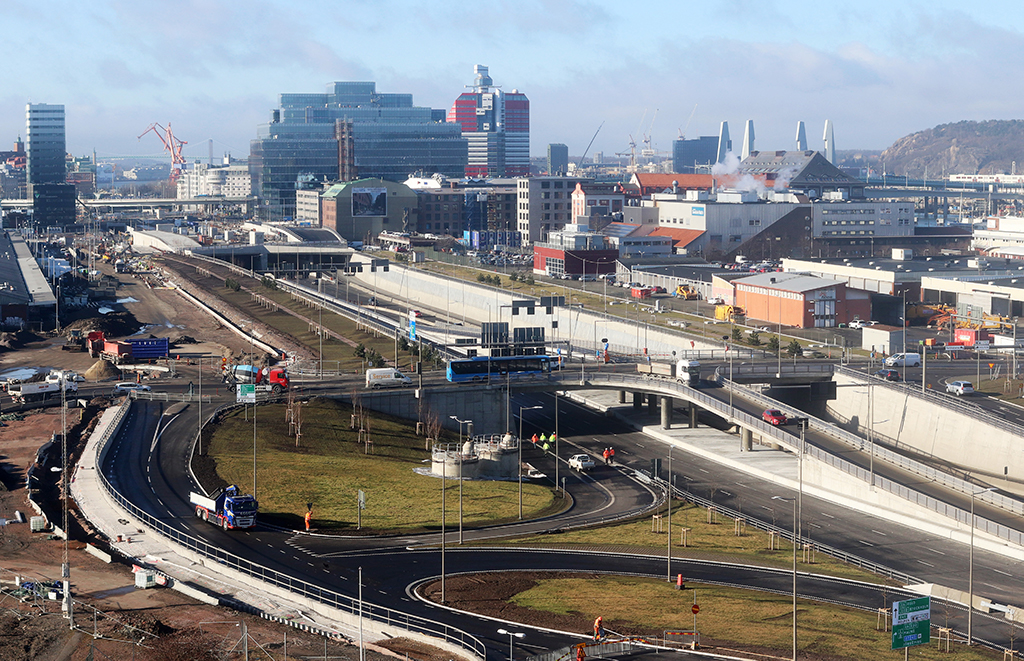 After five years of construction, the Gullberg tunnel in Gothenburg is now fully open for traffic. The new tunnel makes land available for buildings and promenades, and it enables city expansion while improving road safety and reducing traffic noise. The Gullberg tunnel is also an essential link in Gothenburg’s road network, connecting to the Hisingen bridge and the Marieholm connection. Infracontrol have assisted Tyréns, who have carried out the design and construction management of the tunnel, with ITS specialists.

– It feels great that the Gullberg tunnel is now fully open for traffic. This tunnel contributes to increased road safety, since the lowering of route E45 separates the road from local street traffic and leaves several new passages for pedestrians and cyclists. In addition, the traffic noise levels in the area are expected to decrease since the traffic is descended below ground. In time, this tunnel will also contribute to urban development as the surfaces above the tunnel make room for new buildings.

The Gullberg tunnel is approximately 400 meters long, located on route E45 alongside the Göta Älv river in Gothenburg. The tunnel has been constructed by lowering the road six meters below ground, along an 800-meter path between Stadstjänaregatan and Falutorget. Half of this path has then been covered, thus creating the tunnel. Since the route is now below ground level, the barrier that used to separate the city from the river is eliminated. The project cost is around 2 billion SEK and has been co-financed by the city of Gothenburg and the Swedish Transport Administration, where the city of Gothenburg has taken most of the cost. The first tunnel tube opened for traffic in December 2019, and the tunnel fully opened in March this year.

Tyréns have carried out the road design and construction site management  for the complete project, including the tunnel. Ylva Bäckman, who is responsible for the assignment at Tyréns in Gothenburg, tells us:

– This assignment has included road design and tender documentation of a turnkey contract for the lowering of route E45, construction of the new tunnel, and reconstruction of E45 through Gullbergsmotet in order to modify the number of lanes for the new Marieholm connection eastwards. This assignment has been very exciting, and it has required various specialist skills in many fields: installation, foundation, construction, road design, environmental design, and several others.

The new Gullberg tunnel leads to clearing of large spaces, and the city of Gothenburg is planning construction of new buildings, local streets and promenades on top of the tunnel. The tunnel enables urban development and city growth.

– This project has been particularly challenging considering all other ongoing construction projects nearby, such as the expansion of VGR, Platinan, the new Hisingen bridge, Västlänken and the planning of future construction work above the tunnel, says Ylva Bäckman. A lot of coordination and adaptations have been required in this project.

Specialist skills in ITS

Infracontrol has assisted the project with specialist skills in ITS.

– I am very glad that we are joining Tyréns strong team in this project, says Björn Johansson, who is Infracontrol’s specialist in this field. I have been the technical manager of the traffic control part and have contributed with the tender documentation production and as construction site manager for the traffic control equipment of the tunnel.

He tells us that the tunnel equipment includes everything from the tunnel’s main control systems to its ITS equipment, such as detectors, cameras, reversible lane systems, traffic information signs and barriers.

Infracontrol has long experience of how ITS systems can contribute to improved safety and reduced environmental impact, says Johan Höglund, CEO:

– We have participated in the development of several tunnel control systems, for instance in the Gnistäng tunnel, the Tingstad tunnel and the Göta tunnel in Göteborg. This has given us unique experience which we are happy to share in this kind of projects. Well-constructed and thought-out systems contribute to a safer and more efficient traffic flow.